In the Summer of 1980, Darrah and Peggy started dating. Since both of them had some social ballroom experience when they started square dancing and they had learned round dance from different instructors, that Fall they decided to take a ballroom short course at the UW where Darrah was a graduate student. While the instructor was working with other students, Darrah and Peggy worked out how to lead and follow round dance moves, so they could use them in ballroom dancing. At the end of the course, the instructor asked them if they would teach the next session! In January 1981, Darrah and Peggy began teaching Social Ballroom Dance. In the early 1980s, they studied with several Madison area Ballroom instructors, completed intermediate & started advanced round dance lessons with George & Joyce Kammerer (pre-phase ratings), and joined an advanced square dance club.

Darrah and Peggy married in June 1983 and rolled the National Square Dance Convention into their honeymoon. During the drive back from the 1985 National, Darrah announced that he wanted to begin cueing round dance. As she was pregnant with their first child at the time, Peggy thought he was crazy. However, that Fall they started a round dance class geared toward non-square dancers. That class eventually morphed into Friendship Rounds, Darrah and Peggy’s phase 4-6 club which dances in the Madison area.

When their children were small, Darrah and Peggy stopped square dancing regularly. They continued with ballroom and round dancing. Over the years, they have taught several ballroom classes, including college level courses and community all-comers classes in the park. Peggy also teaches private ballroom lessons. Besides their regular club, Darrah and Peggy have taught round dance at several Wisconsin & Illinois conventions and other weekend round dance events. Darrah occasionally cues at various square dance clubs around the area.

Darrah and Peggy are individually certified by the Imperial Society of Teachers of Dance (ISTD) and American International Dancers Association (formerly USISTD) as ballroom dance instructors. They are not competitive ballroom dancers, but they love how round dance and social ballroom dance complement and enhance each other.

When not dancing, Darrah is a Professor of Math and Computer Science at Beloit College in Beloit, Wisconsin and Peggy is a retired Database Administrator. They are both avid Pokemon Go players and science fiction and fantasy book readers. Both of their children are grown and married. Recently the grand-twins started round dancing. 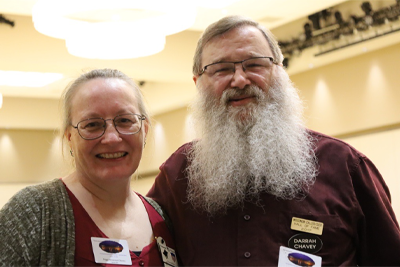